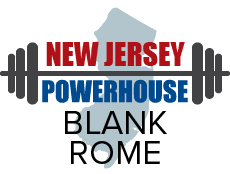 Blank Rome LLP is pleased to announce that the Firm has been named a 2018 New Jersey Powerhouse by Law360, who recognized Blank Rome and other leading firms in its 2018 Regional Powerhouses list for handling “some of the biggest deals and most high-profile courtroom battles,” offering clients “regional expertise and making a lasting impact on the law at the state and local level.”

Law360 recognized five firms, including Blank Rome, as New Jersey Powerhouses, notably for their accomplishments over the past year in regulatory and litigation fronts, as well as “thriving amid the competition that marks the most densely populated state in the nation.” Law360 particularly highlighted that the current crop of New Jersey Powerhouse firms are all home to former judges or New Jersey Supreme Court justices, to which former U.S. District Court Judge Stephen M. Orlofsky, who serves as Administrative Partner of Blank Rome’s Princeton office, stated, "It's always nice to have a former judge or justice at the firm who you can consult for a variety of issues.” (NJ Powerhouses Seize Sports Betting, Pot Law Opportunities, Law360, Aug. 27, 2018.)

Blank Rome LLP maintained its niche over the past year among New Jersey’s top firms for appellants, with state Supreme Court victories that fended off a class action lodged against TGI Friday's under the Garden State’s notoriously tough consumer laws and that convinced the justices to grant absolute immunity for public entities facing tort liability in a suit against the city of Paterson.

In another appellate triumph marking the Philadelphia-based firm’s nearly 35 years in the state, Blank Rome’s New Jersey team came to the aid of an industry colleague when it helped a former Pennsylvania law firm stay clear of a suit over a complex real estate deal. Those feats and others sealed its place on Law360’s 2018 list of New Jersey Powerhouses.

The firm’s office in Princeton, which has operated since 1984, was an outlier of sorts as one of the first Garden State outposts for a big-city shop, according to former federal Judge Stephen M. Orlofsky, the administrative partner who oversees the firm’s nine attorneys in New Jersey.

“Now, nearly 35 years later, we have grown formidably, from our number of practicing attorneys to our notable legal capabilities and community presence,” Orlofsky told Law360.