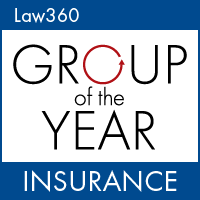 Blank Rome LLP's insurance recovery practice has steered a high-profile coverage dispute for one of California's largest health care providers, secured a quick win on several claims for ship interior company Hopeman Brothers Inc., and achieved a $30 million settlement for the bankrupt Catholic Diocese of Duluth, earning it a place among Law360's 2018 Insurance Practice Groups of the Year.

The head of the practice group, James R. Murray, and vice head Linda Kornfeld told Law360 that despite exclusively representing policyholders, the two dozen attorneys in the practice group have plenty to keep them occupied. They attributed the firm's success in part to its client-focused attitude, the depth of experience among the attorneys and a strong spirit of collaboration.

"Our group truly operates as a national group practice," Murray explained, adding that the group holds regular meetings and that it's the norm for attorneys to work with one another across offices.

Over the past year, the group has also achieved impressive results in several high-profile cases, including representing the Diocese of Duluth in its Chapter 11 proceedings. The diocese declared bankruptcy in order to try to find a way to compensate victims of sexual abuse by clergy members and still remain in operation.

Blank Rome, which has previously handled insurance matters for other dioceses in similar situations, was brought in as special counsel for insurance.

Murray, who worked on the case, said that for most small dioceses, the main asset in play in the bankruptcy proceedings is insurance, making it crucial for the firm to ensure the insurance company pays up.

"Our job in this, even though we're representing the debtor diocese, is to get as much insurance money as we can, almost every cent of which goes to the victims of sexual abuse," Murray said.

In the Duluth bankruptcy, the firm obtained a crucial ruling in which the judge found that each instance of abuse should be considered a separate occurrence for the purpose of the policy, rather than everything being grouped together as oversight by the bishop and treated as a single occurrence. That distinction opened the door to a much larger payout under the policy.

"This was one of the few cases in this area that actually had a ruling," Murray said. Most cases, he explained, settled before reaching that stage, making the favorable ruling all the more exciting.

The diocese eventually reached several settlements with different insurance companies, including a $15 million settlement with Continental Insurance Co. All told, the various settlements came to about $30 million, the firm said.

"People ask me if this is a depressing area to be in so much," Murray said. "It is [but] this is the first time in the history of the world that this issue has been out in the open and is being dealt with." Knowing that the money the firm recovers goes to help victims, he added, is "quite rewarding."

The group is also representing Cottage Health, a group of hospital facilities in California, in a suit over insurance coverage for a data breach that explores new territory in cyber insurance. Kornfeld, who worked on the case, explained that the issues involved are still new for the courts.

"In the world of cyber insurance, there hasn't yet been much litigation over how cyber insurance policies are interpreted and applied in a data breach situation," she said. Although there have been other cases, she said, most of the policies in question have not been cyber-specific.

Since filing the $4 million case, Blank Rome has fought off a bid to move the case from state to federal court and has overcome two motions for summary judgment. The case is currently in discovery and slated for a trial later this year.

In another case, Blank Rome represented Hopeman Brothers Inc. in a dispute with Continental Casualty Co. and the AIG unit Lexington Insurance Co.

Hopeman was seeking coverage for more than 123,000 claims filed over the past four decades by individuals who were allegedly injured when they were exposed to asbestos-containing panels the company manufactured. The suit concerned policies the company held during the 1970s.

The firm won a motion for partial summary judgment in April, and the case settled in June.

Looking forward, Murray and Kornfeld said, the firm continues to have plenty to keep the attorneys busy. Increasingly, attorneys from the group are being asked to advise on deals as more companies recognize that insurance is a key part of various negotiations, Murray said.

"With the volatility [in the] global market I think that will continue," he added.

Kornfeld said the firm has also been called in on cases in the wake of natural disasters, such as the California wildfires in 2018 and Hurricane Maria in 2017.

"Hopefully in 2019 there are no natural disasters," she said. But if there are, she added, the firm will likely be there.

"Insurance Group of the Year: Blank Rome," by Emma Cueto was published in Law360 on January 25, 2019. Reprinted with permission.